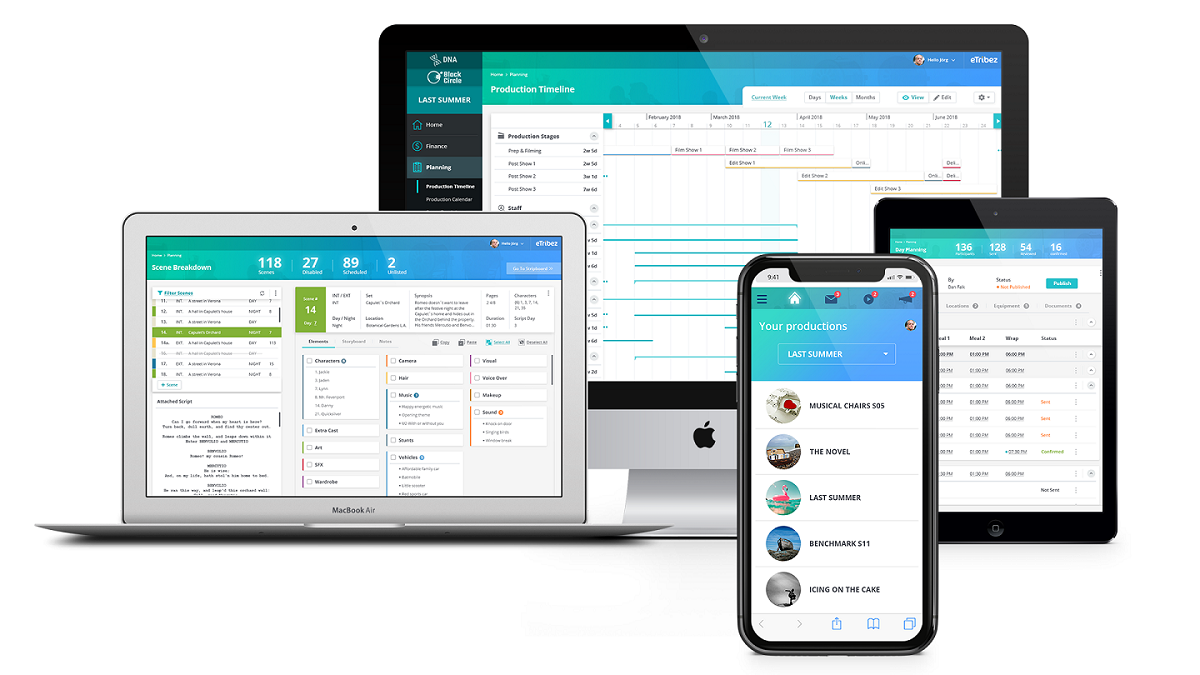 Los Angeles and Tel Aviv, January 16, 2019 – An unprecedented, end-to-end, Cloud-based Production Management Platform called “eTribez Production Management” –  developed by Israel-based eTribez Labs, Inc., – has been launched and is now available to producers of content for the entertainment, broadcasting, promo, and advertising industries, on a global basis. The benefits of the new platform offer producers of original content an easy to use, Cloud-based platform that is accessible from any device, updates in real time, and is comprised of complimentary “Modules” that communicate with each other. The new platform unifies and synchronizes every aspect of the production process via one centralized solution – historically, these production processes have never before been inter-connected. Designed to perform on a studio level, the eTribez Production Management Platform is highly secure, has been ISO 27001 and SOC 2 certified, and is GDPR compliant.

Since eTribez’s founding in Tel Aviv in 2012, the company has earned a solid reputation from major industry producers around the world who have embraced its highly successful, online, NON-SCRIPTED CASTING AND CAST MANAGEMENT service. During the past seven years, that service has powered the casting management behind over 200 non-scripted TV series including such hit global formats as Big Brother, Idol, Got Talent, Survivor, The Voice, The Amazing Race, MasterChef, The Chase, and many others.

The announcements were made today by Eli Abayan, CEO/Co-Founder, eTribez Labs, Inc.

For the past seven years, eTribez has been offering major international TV producers a variety of innovative and unique online casting and audience engagement solutions. Major TV industry clients of eTribez are based in 19 territories, including the U.S., the UK, France, Germany, Australia, Brazil, the Netherlands, Spain, and Italy. Among these high profile clients are ITV, Fremantle Media, Endemol Shine Group, FOX, Sony Pictures Television, the BBC, Canal +, NBC, Univision, Televisa, MTV, RTL, and many others.

Mr. Abayan said, “We are confident that our new eTribez Production Management Platform will revolutionize the global production industry and will be embraced by producers around the world seeking the most efficient and comprehensive means possible by which to plan, organize and implement their projects. Nothing like our platform has ever existed before! We designed our new service with a studio approach, giving everyone who uses it a cross-section view, in real-time, of every aspect of the production process, from start to end. We truly believe that once producers have had a chance to integrate this new asset into their workflow, they will quickly realize how our new platform will significantly help to streamline their process.”

Adds Mr. Bookstaver, “Until now, TV and film productions have been managed primarily by pen and paper, tools such as Excel and Google Docs, or other limited, unsecure desktop services. These methods usually have no connectively to each other, and cause a great deal of manual work, leading to potential delays and mistakes. The eTribez Production Management Platform dramatically simplifies the way producers can handle their productions. While existing solutions such as Movie Magic, Xytech, Scenechronize, and others do have the ability to handle some production elements, ours is a ‘One Stop Shop.’ With its various production modules all interconnected, producers can manage the entire production process from one digitally-secure environment, all on a studio level.”

Among the services and benefits of the Modules comprising the new eTribez Platform:

** Staffing & Crew Management:  This new module allows for easy organization and structure of each production’s staff, and can help assign crew members to production roles. Each production structure can quickly be built from templates or previous productions – and define units, departments and roles. The online staffing module allows the production team to fully manage the hiring, negotiations, contracting and staffing process of the production crew, all from one Cloud-based location.

** Scripted Casting and Cast Management:  The Casting and Cast Management module provides a turnkey, fully customized solution for managing each production’s cast, from the casting process to cast management, for any number of candidates. For scripted programs, this module offers powerful tools such as visual casting boards and rich media profiles, in which producers can easily post and share casting calls with casting agents, and can receive talent applications and manage auditions, shortlists and final decisions.

** Scheduling: This module offers a complete filming scheduling solution for any type of production.

** Resource Management: This new module helps producers scout, manage and track all physical assets – including locations, equipment, production items, wardrobe, vehicles, and animals – associated with each production set. Physical assets can be stored and maintained through a catalog that includes technical information, pictures, reviews and notes for each resource – all of which can be easily accessed by authorized people in each production. The module allows for the easy planning, tracking and management of all aspects of filming schedules, from script breakdowns to filming stripboards. Producers can create detailed scene breakdowns to include any required elements and resources, using an intuitive online solution accessible at any time from the office or the set.

As Vice President, Client Relations, North America, Ted Bookstaver both heads up eTribez’s Los Angeles office, and services the company’s extensive client base located across the U.S. Over the course of his 20-plus years in international television and format distribution, Bookstaver has held a series of senior sales positions at many of the entertainment industry’s leading companies.

From 2016 -2018, Bookstaver was Senior VP, Alternative Programming Sales, for Lionsgate. Earlier (2015/2016), he was VP, International Distribution for dick clark productions, inc., and before that served as Senior VP/Head of Americas for Shine International.

Between 2010 and 2014, Bookstaver was Senior VP, International Sales with Eyeworks International Distribution. There, he oversaw global distribution efforts for that newly-formed distribution division of this major independent global production company.

Founded in Tel Aviv, Israel, in 2012 by Eli Abayan (CEO), Nir Segal (COO), and Oz Ben-Eliezer (CTO), and with additional offices in Los Angeles, CA, and London, UK, eTribez is a leading provider of comprehensive digital solutions for the production and casting of scripted and non-scripted content. The company’s cutting-edge technologies provide broadcast networks and television production companies around the world with a comprehensive suite of solutions to operate the most successful, profitable, and efficient productions in the entertainment, broadcasting, promo and advertising industries today.

For the past seven years, eTribez has been offering major international TV producers a variety of innovative and unique online casting and audience engagement solutions. Major TV industry clients of eTribez are based in 19 territories, including the U.S., the UK, France, Germany, Australia, Brazil, the Netherlands, Spain, and Italy. Among these high profile clients are ITV, Fremantle Media, Endemol Shine Group, FOX, Sony Pictures Television, the BBC, Canal +, NBC, Univision, Televisa, MTV, RTL, and many others. eTribez has powered the casting management behind over 200 non-scripted TV series including such hit global formats as Big Brother, Idol, Got Talent, Survivor, The Voice, The Amazing Race, MasterChef, The Chase, and many others.

Among the benefits of eTribez’s unique solutions:

** All Production and Casting Elements Exist in One, Streamlined, Digital Location

** A Cross Production View for Production Companies is Easily Available

** All of eTribez’s Services are Highly Secure, ISO 27001 and SOC2 Certified, and GDPR-Compliant